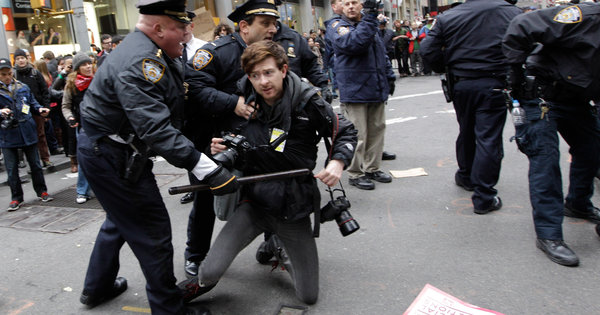 Early Tuesday morning, the New York Police Department forcibly evacuated Zuccotti Park, home of the Occupy Wall Street movement. The move provoked a clash not only with protesters but with the press. In what appears to have been a coordinated effort to block coverage of the raid, the police barred many journalists from reporting on the police action.

Mayor Michael Bloomberg said the police kept the media away “to prevent a situation from getting worse and to protect members of the press.”

But according to the New York Times, one journalist told a police officer “I’m press!” and the officer just responded “Not tonight.”

If the mayor of our country's largest city thinks protecting the press means silencing them, we're in big trouble. And he’s not alone. Police harassment of the media has been reported during "Occupy" protests in Chicago, Denver, Oakland, Portland and beyond. Arrests of journalists continued throughout the week as protesters took to the streets nationwide.

The NYPD is using more than words to fight journalists. Since Tuesday, 13 reporters have been arrested, another was put in a choke hold, another was beaten with a baton and others were subjected to police harassment.

In fact, since the birth of the Occupy Wall Street movement two months ago, 26 journalists have been arrested and countless others have been roughed up, tear-gassed and pepper sprayed. There have even been reports of police using high-powered strobe lights to disable video cameras and block people from recording their actions.